It is not uncommon to learn about non-Indigenous entities appropriating Indigenous culture but none of them are as large, prestigious, or well-known as The Apache® Software Foundation is in software circles. They are known for the Apache® Software License, an open-source software license, and the Apache® HTTP Server, which is used nearly everywhere to proxy requests to incoming servers. The nonprofit entity was established in 1999. One of the founders, Brian Behlendorf, describes how he came about choosing the name Apache in the documentary “Trillions and Trillions Served”:

I suggested the name Apache partly because the web technologies at the time that were launching were being called cyber this or spider that or something on those themes and I was like we need something a little more interesting, a little more romantic, not to be a cultural appropriator or anything like that, I had just seen a documentary about Geronimo and the last days of a Native American tribe called the Apaches, right, who succumbed to the invasion from the West, from the United States, and they were the last tribe to give up their territory and for me that almost romantically represented what I felt we were doing with this web-server project…

This frankly outdated spaghetti-Western “romantic” presentation of a living and vibrant community as dead and gone in order to build a technology company “for the greater good” is as ignorant as it is offensive. We urge The Apache® Software Foundation to take the necessary steps needed to express the ally-ship they promote so deeply on their website, to act in accordance with their own code of conduct, to “be careful in the words that [they] choose”, and change their name.

Indigenous erasure is the systematic process of opposing, removing, re-framing, and undermining Indigenous presence, past and present, within the broader historical narrative from which they originated and continue to exist. There are several things that Behlendorf says that perpetuate this process in deep and concerning ways. For example, Behlendorf says “the last days of” to frame Apache existence as in the past as opposed to the present. This erasure removes responsibility from the perpetrator of the erasure to acknowledge Indigenous people here and now and reckon with the reality that their actions are an extension of the colonial entity the Apache fought against. There are currently 8 federally recognized tribes that carry on the Apache name and represent thousands and thousands of living, breathing people:

Organizations that say they support Indigenous peoples while using erasure type language is harmful and counterproductive. This type of erasure undermines the abilities of Native and non-Native people to work together. It also threatens critical rights around Indigenous sovereignty, self-determination, and respect. Ultimately, this undermines the foundation’s work to better serve marginalized communities.

Romanticizing Indigenous cultures is a way of framing them as static rather than dynamic. It also fails to acknowledge years of war, forced assimilation, and other adverse policies embedded as historical trauma throughout the generations and up to this day. Organizations that say they support Indigenous peoples but who lack any real connection to them, instead relying on historical stereotypes, fail to be allies to those they attempt to emulate.

In Their Own Words

Additional information about the name can be found on the foundation’s website. The foundation describes how they do things as “The Apache® Way,” their logo is a feather, and the company even went so far as to trademark the name Apache®. When reading the About Our Name page, they say:

By not enumerating the Apache nations, they fail to acknowledge and respect the name’s provenance and origin, sidestepping any accountability the foundation should have towards them.

This assumes any one of the 8 Apache nations wants to give any legitimacy to The Apache® Software Foundation’s trademark claim, especially, in a court system that has historically ruled against the sovereignty of Indigenous peoples. Imagining the impact of such a court ruling on the culture, one can understand how risky, not to mention expensive, it would be to dispute it.

We are honored that both The Apache Software Foundation and Apache Incubator logos are listed on the official website of the Apache Nation Chamber of Commerce.

A foundation the size of Apache®‘s should be able to demonstrate support beyond one page of a single website offering a rubber stamp. Any indifference towards this fact demonstrates a distorted view of the foundation’s relationship with historically marginalized peoples.

Issues of appropriation are nothing new for Indigenous folks in the US and the world. Nonprofits are service organizations. They should be held to a higher standard when it comes to interacting with historically excluded communities. To that end, Natives in Tech is a service-based organization of hundreds of Indigenous Peoples in technology who participate actively in re-imagining this world as a place where Indigenous people’s identities are respected, in all realms, including software engineering.

Again, we urge The Apache® Software Foundation to take the necessary steps needed to express the ally-ship they promote on their website, to act in accordance with their own code of conduct to “be careful in the words that [they] choose”, and change their name.

If you would like to sign a petition to change the name check out this project we are supporting called "End ASF Mascotry":

If others want to help find possible replacements for the Apache® name, check out the article below and send some ideas to their GitHub repository. 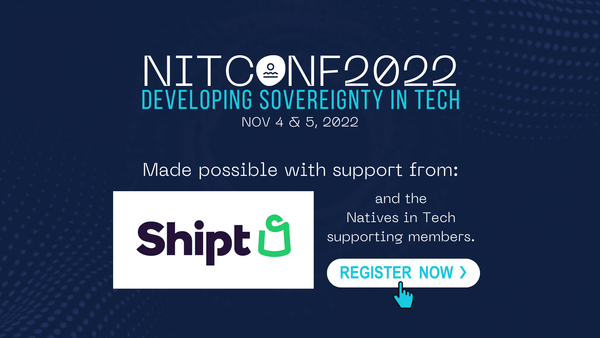 Join Natives in Tech for two days of keynotes, lightning talks, workshops, networking, and panels about technology and its impact on the lives and experiences as Indigenous Peoples.